Alan Ansen passed away in Athens, Grece on November 12, 2006. A poet, playwright, and author, he was associated with both the Beat Generation & New York poets. Ansen served as secretary to W.H. Auden for a number of years. 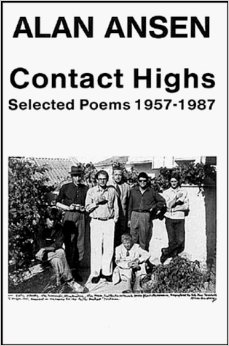 Ansen inspired the character Rollo Greb in On the Road, and other of Kerouac’s characters as well. Living in Tangier, he spent time with Paul Bowles, Burroughs, Allen Ginsberg in others. He was based in Greece for about the last 40 years of his life.

Speaking to John Barbato several years ago, Ted Joans said of Ansen, “Once upon a time there was a whole bevy of Beats and now there’s only a few. There’s Alan Ansen in Athens, Greece, who people don’t know very well. Without Alan Ansen there would be no William Burroughs…” Read more…

There’s a very good discussion of Ansen’s life and work in the introduction to his book, Contact Highs: Selected Poems, 1957-1987, which is well worth locating.

A lengthy obituary with a photo, written by Ansen’s friend John Zervos, appeared in the Athens News on November 17, 2006. Amalosh also wrote an interesting blog entry.

The Table Talk of W.H. Auden
New York: Sea Cliff Press, 1989. Edited by Nicholas Jenkins with an introduction by Richard Howard. 150 copies were printed; 123 pages. Later published in Princeton, NJ by Ontario Review Press in 1990 and in London by Faber & Faber in 1991.

The Old Religion
New York: Tibor De Nagy Gallery Editions, 1959. Ansen’s first book, it was edited by John Bernard Myers and printed by the Salvagno Press in an edition of 300. Wrappers.

Know of other good Alan Ansen resources? Let us know below.

Denise is Empty Mirror's founder and editor. She's edited several other literary magazines and small-press publications since the 1990s. When not at Empty Mirror, you can probably find her reading or writing -- or out exploring the back roads and beaches of Washington State.