The following is from: “ruth weiss and the American Beat movement of the ‘50s and 60’s” by Horst Spandler, published in: ruth weiss, no dancing aloud – lautes tanzen nicht erlaubt. edition exil, Vienna, 2006. – also used as an introduction to ruth weiss’ book can’t stop the beat – THE LIFE AND WORDS OF A BEAT POET. Divine Arts, Studio City, 2011.

ruth weiss’ and Kerouac’s ways crossed in 1955. By then Kerouac had published but one book, The Town and the City (1950). Two more years were to pass until On the Road made him famous. As ruth weiss stresses, they were not lovers – luckily, she believes, because otherwise their relationship would not have been as relaxed as it was. 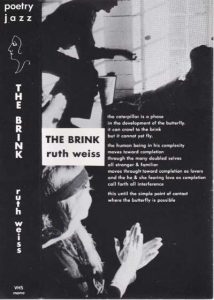 Kerouac’s visits to her place followed a certain routine. He used to show up late at night with a bottle of wine, then they would talk about everything under the sun, about writing stream of consciousness and his technique of sketching with words, i.e. catching moments in a way painters do, which he developed in those years – and they wrote haiku together. Expressing herself in this short form derived from Japanese literature became one of ruth weiss’ long-lasting passions. The poems received a very special note by the water colors she added to them. Jack Kerouac’s collected haiku appeared in 2004. Unfortunately none from this early stage of experimenting with the form are included, because they did not survive. But ruth weiss reports his comments on her poems: “You write better haiku than I do.”

The nightly visits quite regularly ended with Kerouac passing out drunk on the floor, but often sleeping no longer than until sunrise, when Neal Cassady frequently knocked at the door, Kerouac’s friend, whom he immortalized in his novels On the Road and Visions of Cody as the prototype of the Beat hero. Off the three would go on wild Beat style joy rides, pretty much like the ones described in Kerouac’s books, on the serpentine roads of Portrero Hill – rides which ruth weiss remembers not without going goose-pimply, since she believes she owes her life to the fact that so early in the morning there was hardly any oncoming traffic on those blind curves.

That ruth weiss was friends with the surrealist poet Philip Lamantia one usually hears from her in connection with a rather spectacular story she records in Compass, a journal of an extended visit to Mexico. In 1959 she met with two of her friends from San Francisco in Mexico City, Lamantia and the photographer Ann McKeever, and they spontaneously decided to climb the near-by Mayan Pyramid of the Sun in order to watch the sunrise from there. They made it to the top of it, but then her fear of heights paralyzed her to such a degree that she had to be carried all the way down.

Another anecdote, which she willingly tells in her incomparable way, has grown up around her friendship with street poet Jack Micheline. In 1967 she spent some time in Los Angeles, because she had met the artist Paul Blake, her longtime companion and illustrator of some of her books, and followed him there. On her way to the different bars she used to write in she again and again spied a tall and impressive man, who didn’t appear to be threatening, but nevertheless seemed to stalk her somehow. Years later, back in San Francisco, when she and Paul launched Surprise Voyage, a poetry performance series in the Old Spaghetti Factory, somebody recommended poet Jack Micheline, whom she had not met in person yet up to then. She agreed and was just as surprised as he was when they faced each other. He shouted: “Oh, it’s you! You used to follow me all the time in Los Angeles!” That was the start of a lasting contact in the course of which Micheline bought several pieces of art from Paul Blake, but occasionally he also appeared unexpectedly and urged him and ruth weiss to buy some of his drawings, because he was short of money.

A long friendly relationship also existed between her and the poet Bob Kaufman, who had already gained some renown in French bohemian circles famed as “the black Rimbaud”. As a Jew with black skin he was predestined to be a social outcast and was a typical street poet, who was present and well-known on the streets and squares as well as in the bars of North Beach. In no way did he crave for literary fame and he did not bother to write down his poems, because he recited them by heart. weiss contributed a number of poems to the now legendary literature magazine Beatitude, edited by Kaufman, which was distributed in mimeographed copies and offered a platform to some of the better known, but also to now long-forgotten writers of the scene. In his book Blows Like a Horn, Preston Whaley dedicated a joint chapter to ruth weiss and Bob Kaufman – first of all, because he views them as typical members of the Beat Generation in San Francisco, but at the same time also as writers who not only wrote from the extreme fringe of society, but both remained underestimated marginal figures of literature for a long time. He recognizes certain affinities in their literary production of that period, namely that they both “displaced and deconstructed the self in order to cross […] the very brink of selfhood” and broke open syntactical structures.

she grooves with time
day time, night time
be bop jazz time
dances with timeless time
all rhythm no rhyme
birds in flight flap their wings
copulate with the wind
a magician’s illusion where
time and words move from celibate
to wild orgy
feed off the flesh of the other
pause in roller coaster freeze
stop motion
she sings her song
another day another night
bitch slaps father time
kaufman, son of jazz
in her heart
micheline in her blood
jazz in the Fillmore|
jazz on the Harlem rooftops
full moon rising
with poems that dig into my bones
lubricates the gears of my mind
lost in a haze of motionless motion

WHAT MADNESS THIS IS,
TO LIVE FOR ONE LINE OF WORDS
LIKE JOY,
LIKE THE FIRST KISS
AND THEN THE GOODBYE,

LIKE A JAZZ RIFF
STILL ECHOING
LONG AFTER THE CLUB
HAS CLOSED
AND THE CROWD
HAS GONE HOME;

AND NOTHING ELSE EXISTS
BUT THIS RIGHT NOW,
THIS JOY FOREVER.

Some of ruth’s books

reading at the Beat Museum, accompanied by percussionist Hal Davis.

a conversation with ruth weiss

“Make Waves – A New View of What Matters”

Horst Spandler is a scholar of the Beat Generation.

A. D. Winans is a native San Francisco poet, writer and photographer. He was friends with Jack Micheline, Bob Kaufman, Charles Bukowski and other poets and writers of the 50's and 60's. The author of over 50 books and chapbooks of prose and poetry, his work has appeared internationally and been translated into nine languages. He is the winner of a 2006 PEN National Josephine Miles award for literary excellence. In 2009 PEN Oakland presented him with a Lifetime Achievement Award. One of his poems was set to music and performed at Tully Hall, NYC. His book, Drowning Like Li Po in a River of Red Wine: Selected Poems:1970-2010 is available from BOS Press. He is available for readings. Visit A.D. on the web: A.D. Winans | A.D. Winans Website | A.D. Winans Fan Site

Bob Booker is a longtime contributor to the San Francisco-Bay Area poetry scene as a poet, editor, teacher, performer, and promoter.

Neeli Cherkovski is writer-in-residence at New College of California in San Francisco. His books of poems include LEANING AGAINST TIME.