Joost de Jonge is a widely exhibited Dutch artist with work in a wide range of international collections. He was educated at the Royal Academy of Art in The Hague and ’s-Hertogenbosch, and at the Universitat de Barcelona. He earned his BFA in painting with honors at the School of the Arts in Utrecht, followed by an artist residency at the Fundación Cultural Knecht-Drenth in Callosa d’en Sarrià, Spain.

In 2008 he began publishing catalogues of his work. In 2011 he initiated the Ekphrasis Project with his book The Ekphrasis Project: Oceanen van Kleur, inviting art critics, art historians, and poets to respond to his paintings with original writings. In 2014 the series became an online publication, and in 2015 he produced his first e-book with its own domain at paintedpoetry.org: Painted Poetry & Painterly Poetics—an ekphrastic notion. The collaborative project flourished with contributions from across Europe as well as from important American poets and writers.

His photos and poems have been featured in Dutch magazines, In 2014 the art critic and curator Peter Frank interviewed him for a YouTube video titled “Joost de Jonge: A Life of Art,” directed by Juri Koll and produced by the Venice Institute of Contemporary Art.

Son of Daedalus 1. I await your stirring of emotion in the needle bushes beside the tree my path like a burning daemon touches no ground to honor your reality is like darkness the … END_OF_DOCUMENT_TOKEN_TO_BE_REPLACED 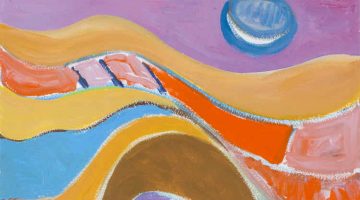 Now Now is not past, but will be soon, With everything that is to come Under the stars and the white moon. An argued choice we make at noon By midnight sees us drained and dumb. Now is not … END_OF_DOCUMENT_TOKEN_TO_BE_REPLACED

daredevil it felt as if he was made out of gold his head rested upon his shoulders weightless, his father called for him but Icarus seemed hypnotised lost in a curve of endless blue the … END_OF_DOCUMENT_TOKEN_TO_BE_REPLACED

Artist's statement: I proclaim the freedom of abstract art to be self-referential. To be a joyous play of form and color, rhythm is at the heart of my compositions, the pulse which is hidden there, … END_OF_DOCUMENT_TOKEN_TO_BE_REPLACED