The coincidence of a vocation as monk and a vocation as poet — though far from commonplace — is one that occurs often enough so as not to be entirely unfamiliar to many readers of poetry. There are, for example, the celebrated monk-poets of the East: Han Shan and Shide, Chia Tao and Ching An of China; Ryokan and Tonna, Shikei and Sogi of Japan; while in the Western tradition, there are the anonymous Irish monk-poets of the middle ages, Caedmon and John Lydgate in England, Gonzalo de Berceo and Luis de Léon in Spain, and in our own era, the English Benedictine monk and concrete poet Dom Sylvester Houédard, and the American monk-poet Thomas Merton. These are but a few names among many others. The overlap between the two vocations through time and across cultural lines might be attributable to their shared requisites of openness and attention, together with an inclination possessed in common to understand things (such as the ultimate nature of reality) in relational terms, that is to say through figurative language.

Paul Quenon is a Trappist monk and a poet. Amounting to Nothing is the seventh and most recent collection of his poems, following upon Unquiet Vigil: New and Selected Poems, published in 2014.1

The letters “OSCO” appended to his name signify that he is a member of the Order of Cistercians of the Strict Observance, a Roman Catholic contemplative religious order whose lives are dedicated to seeking union with God. Quenon came to the order as a novice in 1958 at the age of seventeen, and is a member of the monastic community at the Abbey of Gethsemeni in rural Kentucky. As Brother Quenon relates in his acclaimed memoir, In Praise of the Useless Life — and as may be inferred from his poems which often celebrate the natural world – for prayer and meditation he prefers to sit outdoors, and, indeed, year-round in all weathers prefers to sleep outdoors in a sleeping bag.2 He is at present nearly 80 years old. 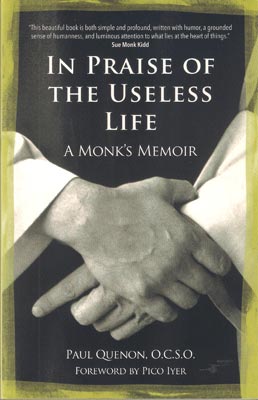 Spare and clear, written with wit and precision, Quenon’s poems keep close to the elemental, to the essentials of experience. His poems are cast both in regular metre and end-rhyme and in various forms and shapes of free verse. The topics range from fireflies and spiders to deer and coyotes, raccoons and crickets, mockingbirds and juncos, trees and flowers, stars and seasons, weathers and clouds, fellow monks and kitchen utensils, tractors and “the fine art of frying an egg.” There are descriptive and reflective poems, devotional poems, odes and elegies, and poems inspired by memories and dreams. A deep engagement with nature informs his writing. Recurrent themes include time, mortality, eternity, and reality. But despite their serious concerns, many of the poems here are touched with mischievous humor, including puns, parody, and paradox.

The sly wordplay at work in the volume’s title, is echoed in the first poem in the collection, titled “Mad Monk’s Life Ambition.” With self-deflating humor the poet-speaker of the verse laments his failure in not having amounted to nothing. To have stripped himself of received habits of thought and feeling, to have erased altogether every self-serving impulse emerging from the shallow surface self (thereby amounting to nothing) was his goal as a monk. While recognizing that at present he does not “amount to a hill of beans,” he still aspires ultimately to amount to “a hill of humus,” that is to say the dark, organic material that forms when plant and animal matter (the ego self) decays. Out of such fertile soil might come, he hopes, new life, out of the humus left by the breakdown of the false, external self might emerge a deeper, truer self.

A poem whose subject and underlying theme linger long afterward to puzzle the mind of the reader is “Critical Change for Whom?” Quenon depicts here a conversation he is having with a friend and fellow monk in which the friend questions the reality of the material world, contending that it is all an illusion. “Reality,” his friend maintains, “is other.” Quenon is reluctant to enter into argument with his friend, but — indicating the individual furnishings about them in the room in which their discussion is taking place — states that he is himself inclined to “take what I see for what it is.” Inwardly, Quenon worries that his friend is oppressed by such “dark concerns” and fears that he is “in for a critical change.” At this point in the poem, the scene changes abruptly and completely. Quenon has awakened from what was a dream of speaking with his friend about the nature of reality. It is night and Quenon is alone, sleeping outdoors under the stars. His friend is three years dead. The friend’s words as spoken in the dream — “ the dream he knew was a dream” — take on a powerful resonance. The world Quenon now beholds has been knocked atilt.

Another poem, titled “A Song,” comprises a baffling, koan-like question and response:

What slips between the in
and the out of my breath?
What does the mountain
always know?

A haunting riddle. The answer is as enigmatic as the question. But the mystery that informs both riddle and reply invites the reader’s intuitive mind to engage with it. Perhaps in doing so we may gain purchase on an elusive truth, one concerning the relation between the ground on which we live and move and to which ultimately we return, and the Ground of Being.

Metaphors and similes as such are scant among the poems in this volume, but Quenon makes recurrent use of anthropomorphization, ascribing human attributes to non-human entities and natural phenomena. The creatures, objects, and events he endows with consciousness and emotions in his poems include trees, thunder, the sun and moon, clouds, birds, wind, snow, flowers, grass, planets, cold and heat, rain, dogs, dawn and geese, raccoons and coyotes. This poetic practice on the part of Quenon derives, I believe, from a sacramental apprehension of the world, a conviction that all created things are sustained in their existence by God, and that God is substantially present in every aspect and particular of the created world. There is, the poems imply, a numinous mystery at the heart of things, a sacred interconnectedness among all terrestrial beings and processes. Far from turning away from the world — as many people mistakenly believe that monks do — Brother Quenon turns toward the world, approaching it with humility, observing it with loving wonder and reverent attention, finding lessons among insects, discovering instruction in blossoms and in a robin’s song, and reading revelations in clouds.

In these crisp, well-crafted poems are to be found depth and strength, clarity and grace, quiet beauty, and a gentle, subtle wisdom. In the deepest meaning of prayer – to address God with adoration or thanksgiving – Brother Quenon’s poems may be seen to constitute prayers. In ways beyond formal orisons and beyond our ordinary linguistic resources these poems by an aged monk articulate such prayer as the poet-priest George Herbert (1593-1633) termed “the soul in paraphrase, the heart in pilgrimage.”3
https://amzn.to/2XhM5c8

Gregory Stephenson grew up in Colorado and Arizona but has lived in Denmark for many years. He is the author of six books, including most recently: Pilgrims to Elsewhere (Eyecorner, 2013).