It’s the goal of small presses such as Inside the Castle, Dostoyevsky Wannabe, Schism, and others like them to publish unconventional forms of literature, those in the expanded field — whatever that might entail. Book-objects that play with what literature is capable of, what it can do or contain. Here, I want to explore some recent projects which each use atypical structures to present their content and to interact with the reader.

How Many Times? by Rhys Hughes 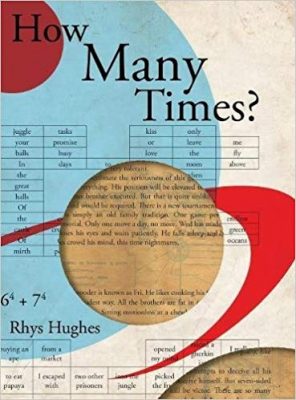 The first of these projects is How Many Times? by Rhys Hughes (Eibonvale 2018) which follows in the tradition of Oulipo, a style originating in the sixties in which writers would create their work under a set of self-induced constraints. In the case of How Many Times? these constraints are often mathematical. Hughes splits the text into three parts. In the first, he utilizes a method of ‘# x # x # x #’ (ex: 3x3x3x3), where the number of paragraphs in any given section is the equal to the number of lines in each paragraph which is equal to the number of sentences per line which is equal to the number of words per sentence. Starting at 1x1x1x1, Hughes eventually works his way up to 7x7x7x7. Even working under this criteria, the writing in this section reads well, seemingly unreliant on the reader’s knowledge of the structure (although it is difficult to remain unaware). The narratives throughout this project have a style very reminiscent of the fabulists, with a voice leaning towards whimsical. And although the book is engaging in its own right, it often reads as an example of what this style could be capable of doing. Hughes comes across as a mathematician showing proofs for his equation, or examples of how his formulas might be used by others. In the second part of the book, the author changes the constraint to “≥2n + 1” which takes the form of grid patterned stories (ex: a 3×8 table of sentences). Hughes has expertly written these grids so that they might be read in any direction and starting at any square. He encourages readers to see what narratives they might be able to extract from these arrangements. Again taking up the fabulist tone of its earlier counterpart, these sections felt reminiscent of old choose-your-own-adventure booklets or early text-based computer games. The writing here is often fun. Having such a diverse set of potential paths, the reader is treated to playful pieces of micro-fiction, curated by the author, but ultimately created by the reader’s decisions. The last part of Hughes’ book is a set of erotic excerpts written in the form of logic-gates, comedically explaining and leading the reader into these sexual moments. How Many Times? often feels more like an introduction than an entire book. And I don’t mean this in a negative way, but more in the way that Hughes has created formulas which other writers (or Hughes himself) might use to create larger projects operating within these same constraints. They each feel so full of potential. A novel of counting up from 3x3x3x3 to 15x15x15x15. A book of choose-your-own-path grids. Romance novels made from logic-gates (Boolean sexualities). How Many Times? is an example of creative methods and how to use them. 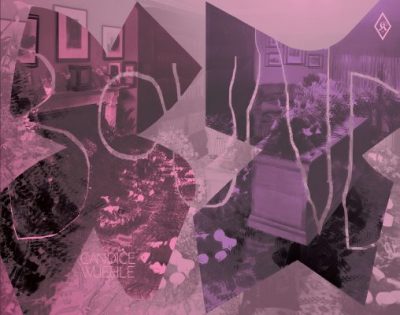 Next, I want to look at a book whose structure is more fluid than that of How Many Times? and Liber Exuvia. Candice Wuehle’s Bound (Inside the Castle 2018) fluctuates between visual, poetic, and dramatic. At times mythological (reminiscent of Liber Exuvia), and often deeply personal. Set on pages that feel vastly larger than the space taken up by Wuehle’s writing. Intimate and vast. As if the writer has sat across from you at the hearth of a dilapidated acropolis, speaking with an audience of ghosts. Bound is an act of performance, of dictation and then retrieval. The language here feels corporeal, as if the author’s dictations are the primary means by which she can capture these memories and examine them. Unlike our early examples, Bound feels driven by the emotions of its speaker. At any moment the form might completely change into something new. A poetic variation of the playwriting style, then a set of free-verse poems, then images, then erasures. The reader never has the chance to become familiar, and that might be because of how personal the writing here feels. There is a sense that the reader does not need to be present for the performance to happen. We are just over-hearing these conversations and dictations. Scattered throughout the book are a series of images which I can only think to describe as an amphitheater of eyelashes. Each of these typically takes up two pages of the text, adding to a sense that the page itself is a kind of setting. As if the author has constructed this abstract place for her memories to materialize, and eventually dematerialize within. Unlike the previous examples, Bound has a sense of instability. The center cannot hold. The latter portion of the book shifts into a kind of erasure, with large blocks of text blocked out. The book desires its own end. The author begins the act of disassembly before the performance has a chance to end. Yet some language still rises to the surface. Blacked out sections are circumvented with white text laid over top. Language and space begin to compete with one another, they talk over one another. Paired with the soft and unexpected visceral qualities of the images, Bound begins to feel almost biological. A living piece of text. Or the severed limb of a larger biological something. And the fluidity of the form only accentuates this. Where How Many Times? and Liber Exuvia had a greater sense of structure (the former with its Oulipo constraints and the later with its interactive grimoire approach) Bound is loose and adaptive. And this is great. Wuehle’s work here could not work nearly as well as it does here if placed in such constraints. How Many Times? is an exploration of formal restrictions, Liber Exuvia is an interactive exploration of past lives, both authors intricately weaving their content and form together. Bound, on the other hand, feels more focused on content. Living content which must adapt to the constant changes in form. As if running through an obstacle course while reading a book of poems.

Each of these writers has taken the time to thoroughly explore the capabilities of their given form, to see what it can do and what that means for the writing it contains within itself: How Many Times?, a collection of mathematical formulations; and Bound, the living manifestation of dictated memories.

Mike Corrao is the author of four books, Man, Oh Man (Orson's Publishing), Two Novels (Orson’s Publishing), Smut-Maker (Inside the Castle), and Gut Text (11:11 Press), one chapbook, Avian Funeral March (Self-Fuck), and many short films. Along with earning multiple Best of the Net nominations, Mike’s work has been featured in publications such as 3:AM, Collagist, Always Crashing, and The Portland Review. He lives in Minneapolis. His website is mikecorrao.com.