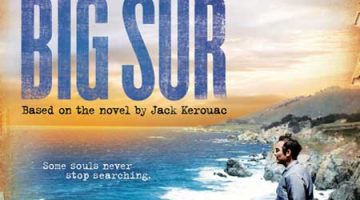 Gathr Films has announced a series of one-day-only showings of Big Sur in indie theatres in selected cities across the USA the week of October 14, 2013. These screenings are in advance of the film's nationwide release on November 1, 2013. Here's your chance to see it before anyone else! Check out the schedule below & get the details... Gathr Films Serves Up National … END_OF_DOCUMENT_TOKEN_TO_BE_REPLACED

[box style="info"]Happy April Fool's Day! Sorry for the prank. We couldn't resist. Can't imagine what an Old Angel Midnight would be like...probably unfilmable, right? But while you're here, you'd probably enjoy Gregory Stephenson's essay on Old Angel Midnight - or some of our other Beat articles and reviews. Or, check out Jay Farrar and Ben Gibbard performing … END_OF_DOCUMENT_TOKEN_TO_BE_REPLACED

Big Sur is often ignored by critics and Kerouac fans alike. We all want the freedom of On the Road, the craziness of The Dharma Bums — the celebration of the Beat lifestyle. We want young Jack living his American Dream of the road. But Big Sur shows what happens to Kerouac as fame and age taint that dream. "I'm just plumb sick and tired...of the whole nerve-wracking … END_OF_DOCUMENT_TOKEN_TO_BE_REPLACED