One of the biggest crimes committed by the music industry has been their ability to co-opt, dilute and turn even the most radical of genres into something safe for mass consumption. Disco, punk and rap have all been taken and watered down so they would sell in Peoria. Even worse is how the industry corrupts these forms, turning them inside out, so instead of preaching against … END_OF_DOCUMENT_TOKEN_TO_BE_REPLACED

In the early 1960s the creation of artificial borders in the trackless wastes of the Sahara desert might have been cause for celebration among the inhabitants of the newly created countries. However, the throwing off of colonial masters in Niger, Mali, Algeria, Morocco and others, also resulted in turmoil for the nomadic people who had called the region home for close to a … END_OF_DOCUMENT_TOKEN_TO_BE_REPLACED

At first glance the Sahara Desert of North West Africa seems like one of the most inhospitable places on the face of the earth. Movies, and other Western media, usually show us images of trackless wastes, endless miles of sand dunes dotted with the occasional oasis and scrubby plants. However, this supposed barren land has been home to various nomadic people for centuries. … END_OF_DOCUMENT_TOKEN_TO_BE_REPLACED 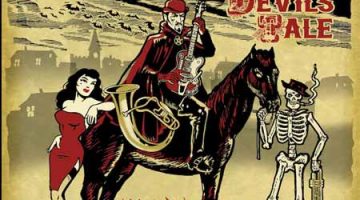 When the Ottoman Empire invaded Eastern Europe they brought more than just their armies with them. Even today evidence of their occupation can still be found. Muslim communities in Serbia are only the most obvious reminder of their one time rule as traces of their cultural influence can still also be seen in other, more subtle forms, including musical influences. The invading … END_OF_DOCUMENT_TOKEN_TO_BE_REPLACED

Some people say, "Politics make strange bedfellows" (Don't say it to Putin - he might take it the wrong way and have you thrown in jail) but the first time I heard Viggo Mortensen had collaborated on an album with the notorious, infamous, riotous, speed metal, punk, over the top guitar player Buckethead, I thought politics has nothing on music. The idea that the actor, poet and … END_OF_DOCUMENT_TOKEN_TO_BE_REPLACED

We all listen to music. Maybe we only have it playing in the background, use it to help us sleep or meditate, or perhaps you sit and listen to it carefully. However, no matter how or why you listen, it can't help but have an effect on you. The majority of us just take it for granted that we enjoy the music we listen to and never really stop to think why. While we can talk about … END_OF_DOCUMENT_TOKEN_TO_BE_REPLACED

There are some subjects I know not to talk to most people about, because they probably won't like what I have to say on the matter. Always having been slightly left of most anarchists I'm supposed to hold to certain opinions in order to not let the side down. Yet, I've always been of the opinion that being an anarchist means you can have whatever opinion you want and not have … END_OF_DOCUMENT_TOKEN_TO_BE_REPLACED

When the annual Festival Au Desert in Northern Mali was cancelled in 2013 due to the territory's occupation by terrorist organizations intent on imposing a very narrow definition of Islamic rule, organizers of the Festival were determined, if the world couldn't come to them, to bring the music of the Festival to the world. Formed in 2001 the Festival takes place during the … END_OF_DOCUMENT_TOKEN_TO_BE_REPLACED

"I love the sound of background noise I wanna hear the crack in the singer's voice Fingers moving on the fret board Every time he plays a new chord" (Art Brut, "Slap Dash For No Cash") When most people think about the best records of the 90’s they recall classics such as Radiohead’s OK Computer, Nirvana’s Nevermind or maybe REM’s Automatic for People. The name Guided … END_OF_DOCUMENT_TOKEN_TO_BE_REPLACED

I was in college back in 1987 when Kylie Minogue had her first hit with "Locomotion," which I remember dancing to on nights out. But after that, though I occasionally heard songs on the radio, I confess her music mostly fell of my radar. (I mostly listen to indie and singer-songwriter type music, with some classic rock, world music, classical, folk, jazz & blues in the … END_OF_DOCUMENT_TOKEN_TO_BE_REPLACED