Gary Cummiskey is the author of several poetry chapbooks, including Don’t Stop Until Incinerated (Tearoom Books, Stockholm, 2016), I Remain Indoors (Tearoom Books, 2013) and Sky Dreaming (Graffiti Kolkata, India, 2011). In 2009 he published Who was Sinclair Beiles?, a collection of writings about the South African Beat poet, co-edited with Eva Kowalska. He is also the author of a collection of short stories, Off-ramp. He lives in Johannesburg.

A wave of the leg to Shams We’re cruising at 39 000 feet yet with the mountains so high I feel I could just put my hand out the window and touch the snow-capped peaks. I’m exhausted from this extra-long flight, but the hotel in Venice is still far away. We’re turning left into Turkey soon, just at Tabriz. Give my love to Shams. Barcelona He wakes … END_OF_DOCUMENT_TOKEN_TO_BE_REPLACED 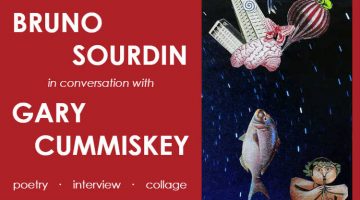 Bruno Sourdin is a French poet and collagist. He was born in 1950 in the Mont-Saint-Michel area. After studying journalism in Paris, he travelled in Morocco, Egypt, and India. He now lives in Normandy. His first collection of poems, Les Haillons d’Ecume, was published in 1977. His more recent titles include Hazel (2005), L’air de la route (2013), Vers les fjords de l’ouest … END_OF_DOCUMENT_TOKEN_TO_BE_REPLACED

I met Ted Joans when he came out to South Africa in late 1993. I attended a workshop of his and was most impressed by his warmth, humour, humility and infectious creative spirit. He had emphasised the importance of simply 'writing down the poem', not worrying about issues of form or even reception, just get the poem out, let it live. I will also always remember his words: 'The … END_OF_DOCUMENT_TOKEN_TO_BE_REPLACED