[Editor’s note: These photos are small! This page was first created many years ago for smaller screens. I have larger photos somewhere and will update this page as soon as possible.]

Shig was one of the founders of City Lights. A generous, kind and unassuming person, Shig was a quiet fixture in the North Beach art community. Ginsberg stayed at his Grant Street apartment when he was in town.

Philip and Norman were very close. From time to time they had lunch together, which they were on their way to when this photo was made. Philip loved going to lunch, speaking dreamily of particularly auspicious French fries, or the Mongolian beef at the Chinese place in Japantown. If his flights into food heaven became impassioned enough he’d raise his voice in mantra, “More grease! More grease!”

Philip sometimes depended on friends for a place to live, as he rarely had a steady income. Subsequently, his large library often remained in boxes. I once spent two weeks moving the library from one place to another, arranging the books under Philip’s direction. As glaucoma had left him almost blind, by that time, he placed each book, from memory, in its idiosyncratic order. Putting the library together took so long because Philip often stopped to finger the pages of his dear friends, and talk about their qualities, these exertions followed by a nap.

This portrait was taken in the study of the Kearny Street apartment Lamantia shared with Nancy Peters. At the window was a fire escape festooned with tree branches for the companionable finches often in attendance.

Paul made chapbooks on a little press, hand building the blocks of type as if he were coming full circle to childhood. Every Thanksgiving he cooked a feast for all the poets, some of whom besieged his apartment like starvingsaint-zombies crawling up through manholes. One time he and I, members of an artists group, were preparing a huge feed for homeless people in Washington Square Park, when Paul got word that Jack Hirschman was planning to incite the gathered crowd to riot for justice. We knew Jack could probably pull it off, exhorting the throngs like Mayakovsky, and we’d end up running, leaving a trail of ladles and wooden spoons. We chose not to run, and so didn’t cook

Nancy Peters is the hero behind the scenes who rescued City Lights Bookstore from near death in the early ’80’s. She has also been the guiding light (and editor-in-chief) behind the progressive and inspired list City Lights Books has issued over the past twenty years.

Taken in his office above City Lights Bookstore (shaped like an arrowhead bisecting Columbus Avenue and Jack Kerouac Alley), Ferlinghetti spends more time in his painting studio at this point in his life. A quiet, observant presence, “fighting the good fight.”

Philip had been in the hospital, ailing from a heart problem. Upon returning home McClure paid Phil a visit. Subsequently Phil had open heart surgery, which he said left him emotionally vulnerable, as someone had been handling his heart.

Kirby was one of the great characters. Whether reading his passionate poetry, so dripping with archaic language he seemed a 15th century hipster, or loping the streets, a bear jazzing the sidewalks with flights of imagination, Kirby was his own planet. The night of the Loma Prieta earthquake, I had wandered the water front to North Beach. Washington Square Park was full of Chinese people camping out, fearful of the brick buildings of Chinatown. The air was smoky, the city blacked out, people’s faces shining excitement in the murk. I ran into Kirby on Columbus Avenue. We went up to his hotel room and drank beer in the candle light. Kirby fingered his cigarette, thumb under his chin, reflecting on the earth moving, his face kind and far away; the moon in a hotel room. 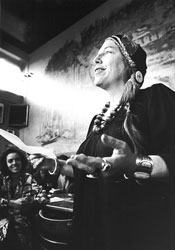 Vinograd, here reading at an event for Beatitudes magazine, was a member of a loose-knit group of poets who read in the back room, every Wednesday night, of Cafe Babar. Hence called the Babarians, their hordes rarely went beyond rudeness and shocking table manners. Best known among them, perhaps, is Alan Kaufman. The Babar was yuppified in 1993, when the sainted owner, Alvin, gave it up, ending another chapter in Bohemia.

Jack was a moving target; he never stopped moving, and so most of my attempts to photograph him failed. Here he is in the alley outside Specs bar, on the occasion of City Lights’ 35th anniversary, happening both in the bar and across the street. Even while giving me the finger, Specs is a classy guy. Two uncompromised individuals.

Relaxing and preparing before reading at the abbreviated National Poetry Festival. The week long event ended with the Loma Prieta earthquake, four days after this picture was taken. Jordan and Rich bask in the applause as they take the stage for their reading at the Cowell Theater at Ft. Mason. 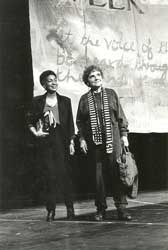 Henry Lenoir founded and decorated the famous Vesuvio Cafe, next to City Lights. The owner of one of the largest collections of Beat art in the world, Henry had many valuable collections, including vintage French magazines and posters. A curmudgeonly character, he didn’t suffer fools at all but could be generous and friendly.

Harold Norse is a small man, but exudes a certain brawn. He also delights in being the bad boy, a quality that struck me as particularly Catholic. These aspects of Norse led me to photograph him thusly in the mud room of his Mission District apartment.

Chatting at the book signing.

Harold Norse, poet and pioneer of gay erotica, signing copies of his memoir at City Lights, flanked by Nancy & Lawrence.

Jack writes lying in bed, paints huge paintings on paper tacked to the wall and issues poetry and translation into the world like sparks flying off locomotive wheels; all from a shoe-box of a hotel room. Striding the world rousing his audience, Jack is the only person I’ve ever met who can combust a room full of strangers into song, flames carrying away the ceiling. 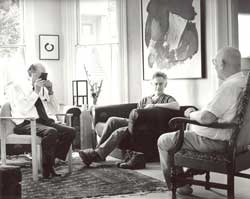 Philip was living at the Hartford Street Zen Center and its next door AIDS hospice, Maitri. Friends occasionally visited. Philip became abbot of the temple nine days after these pictures were taken.

Gregory was on a tear, for reasons unknown, on the street between the City Lights’ festivities at the bookstore and Specs. Gregory was as cantankerous as they come. Once friends piled into their van, taking Corso with them, and drove to Yosemite on a whim. After a wild 200 mile drive they arrived on the valley floor, home to some of the most colossal scenery in the world. Gregory was upset that he might run out of methadone and sat in the van staring at what little of the drug he had left, slugging on a vodka bottle. As they went from one landmark to the next, they’d call Gregory out of the van to look. He’d come out with a blanket over his head, say, “That’s very nice guys, but I’m going back to the truck,” in his high, raspy voice. Regardless his idiosyncrasies, Gregory Corso remains one of the finest poets this country has produced.

Rob Lee is a photographer and writer. He has written a column on urban birds, "Birdbrain," for the San Francisco Chronicle, as well as magazine pieces on natural history and a book on city birds, Angels at the Gates of Eden.
Rob's photography has appeared in numerous books and magazines, including House and Garden, Yoga Journal and Whole Earth Review. A participant in many art shows and photo exhibits, some of the pictures on this web site first appeared in the 1989 National Poetry Festival. This work dovetailed with a project photographing in a Buddhist AIDS hospice, a life changing experience that led Rob to live and work in the hospice as a staff member for a year and a half. The series of photos from the hospice became a traveling exhibit criss-crossing the bay area, and an as yet unpublished text, that builds from a narrative of the intense life in the hospice, to a meditation on our societies' uneasy relationship with death, and how deeply this sense of denial compromises our culture.