A collection of rare and out-of-print interviews with Gregory Corso, one of the founders of the Beat movement in American literature 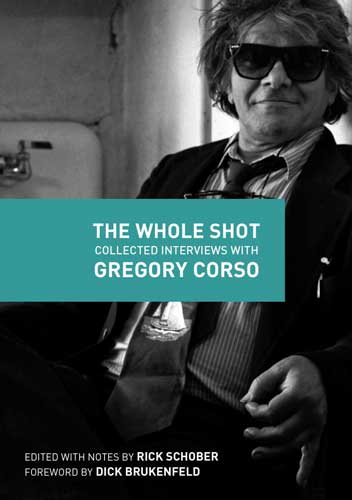 The 202-page book is a collection of 13 rare and out-of-print interviews with Beat poet Gregory Corso (1930–2001) that span the most productive years of his career: from 1955, when his first collection of poems was published, to 1982, the year following the publication of his last book of all new poetry. The foreword was written by Dick Brukenfeld, publisher of Corso’s The Vestal Lady on Brattle and Other Poems (1955), and recounts the poet’s early days in Cambridge, Massachusetts, and as a “stowaway” on the Harvard University campus.

Corso was the youngest of the inner circle of writers (along with Jack Kerouac, Allen Ginsberg, and William Burroughs) who were responsible for launching and popularizing the Beat movement in American literature. Two of Corso’s earlier collections of poetry, Gasoline (1958) and The Happy Birthday of Death (1960), are considered to be groundbreaking works of twentieth-century American literature and yet, unlike the other major Beat writers, both he and his poetry are relatively unknown today.

Among the works included in this collection are two pieces by humorist and syndicated newspaper columnist Art Buchwald, as well as an early interview by Victor Bockris, noted biographer of Lou Reed, Andy Warhol, Keith Richards, Patti Smith, Blondie, Muhammad Ali, and others.

Advance reviews from eminent Beat literature scholars have praised The Whole Shot as “an important collection of interviews that provide a fascinating glimpse into the thoughts, writings and life of a Beat writer who deserves closer attention,” “highly readable,” “a valuable contribution to our understanding of an original and vigorous poetic voice,” and “essential reading for anyone with an interest in Gregory Corso, the Beat Generation, or modern poetry.”

To help defray the costs associated with publishing The Whole Shot, Schober has recently launched a Kickstarter crowdfunding campaign which will run through March 26, 2015, which would have been Corso’s eight-fifth birthday.

Have something to contribute? Leave a comment below or drop us a line.