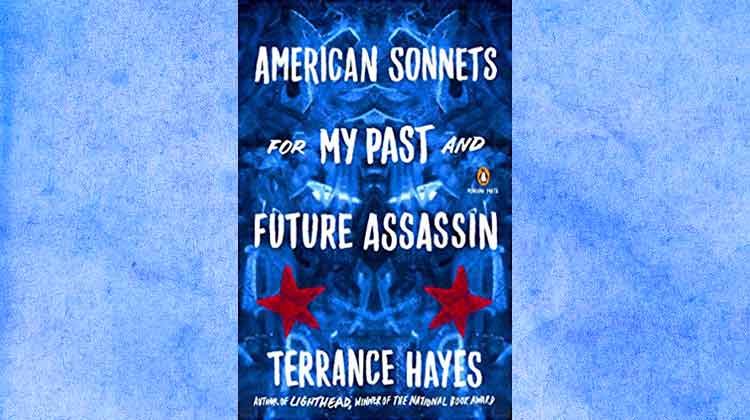 I knew Terrance Hayes’ new book was going to be powerful when some of the poems appeared in the American Poetry Reviewrecently. I am not disappointed. American Sonnets for My Past and Future Assassin is, I’m calling it, the best book of poetry of the year. It’s the angry (though sometimes humorous) response, not just for black Americans (though definitely that) but also to anyone angry (and maybe a little scared) about these years of “Trump power”.

Americans have been playing with the sonnet form since Ron Padgett and especially Ted Berrigan broke it open. Hayes gives credit to poet Wanda Coleman for the idea of “American Sonnets,” quoting an interview with her in his Acknowledgments page about how she would “give an assignment for writing an American Sonnet”:

First I would explain my process. Then I would invite my students to try it, overlaying their specific 1) issues (what the sonnet is about) 2) rhythms (places and devices often have them) 3) tones (shadings of attitude) 4) musical taste/preference (rock, classical, blues, etc.)—how to develop the minimal language to simultaneously encapsulate and signal each.

Hayes goes on : “When asked for a definition she called poems jazz sonnets ‘with certain properties—progression, improvisation, mimicry, etc.’ and concluded, ‘I decided to have fun—to blow my soul.”

“Blow my soul” is exactly what Hayes does. Each poem shares the same title, “American Sonnet for My Past and Future Assassin,” and each is fourteen lines, not iambic, their length running anywhere from eight to up to 14 syllables, though each poem appears as an even “block.” No end rhyming, though Hayes reflects his “musical taste/preference” with plenty of inner rhymes listeners of hip-hop will find familiar, along with inner jazz-drumming rhythms. What keeps the sonnets sonnets is that they still have that “turn” (or “volta”) at around line eight where the subject matter shifts and/or focuses. With Hayes, this shift usually involves angry/sarcastic dark humor focusing down to an angry image or statement of fact about some aspect of American culture, although sometimes the whole poem is just an angry indictment, like this one about killers and assassins, past and present:

To put George Zimmerman and John Wilkes Booth in the same line, and call both “Assassins” with-a-capital-A might seem to diminish a huge historical event of our country, but Hayes’ point is that Zimmerman’s killing of Trayvon Martin, and the high-profile killings (and all the ones that were not-so-high-profile) of other black men by white men (cops or otherwise) are in fact political — that these killings, as well as the fact that black men have a one-in-four chance of ending up in prison sometime in their lives (in America, the greatest penal colony in the world) are a political war against black folks.

All of which sounds super serious, and it is, but Hayes brings lighter moments of humor, has fun like Wanda Coleman urged. He teaches at NYU so I can’t help wanting to put him in the New York School lineage, which is probably not fair, but these poems in American Sonnets for My Past and Future Assassin feel like a cross between Frank O’Hara and Amiri Baraka, though I’m not sure how Hayes would feel about that, especially with this poem, which made me laugh, until about line eight:

For her last birthday I found in a used New Jersey
Toy store, a six inch Amiri Baraka action figure
With three different outfits: an elaborately colored
Dashiki with afro pick; a black linen Leninist getup,
And a sport coat with elbow patches & wool Kangol.
Accessories include an ink pen & his father’s pistol.
If you dip him in bathwater, he will leak
The names of his abandoned children. Pull a string,
He sings “Preface to a Twenty Volume Suicide Note”
Sweeter than the sweetest alto to ever sing
In the Boys Choir of Harlem. The store clerk tried
selling me the actual twenty volume note LeRoi Jones
Wrote the night before Baraka put a bullet in him.
I would’ve bought it. But I had no room in my suitcase.

Since every black man in America has to feel like he could end up shot for any minor infraction that most of us make all the time, I started out thinking the poems of American Sonnets for My Past and Future Assassin, and/or the whole book, were letters somehow “to” Hayes’ potential killer(s) (white men), as in angry “fuck you” accusations. But then as I got into it, many of the poems are just about his life, about finding meaning outside of a Christian church (say) or through poetry. But the big picture of the book is that the whole thing is one big letter, one long poem, to everyone — black and white and all other colors — one man writing a letter to show his humanity — that is, an appeal, a plea, to our killer white American culture to see Hayes, to see black people, as human just like everyone else.

This is what literature does: build empathy. Of course, the people who will read this book are in the (secular) choir, but these poems in particular feel like they will permeate out into American culture, spreading their goodness.

Born in Puerto Rico, John Yohe grew up in Michigan and lives in Oregon. He has worked as a wildland firefighter, deckhand/oiler, runner/busboy, bike messenger, wilderness ranger, and fire lookout. He is fiction editor for Deep Wild Journal. Visit johnyohe.com.