Saint of the City by David Noone, introduced by Cathi Unsworth / Murder Slim Press / March 2017

Lunging forwards with a series of rapid-fire blows to the gut masquerading as chapters, Saint of the City, the debut novella by David Noone, pulls no punches as it hurtles by in bare-knuckle women-and-wine confessional mode before departing along its own warped trajectory, dragging the reader through a sludgy morass of nightmares, more Baudelaire than Bukowski. 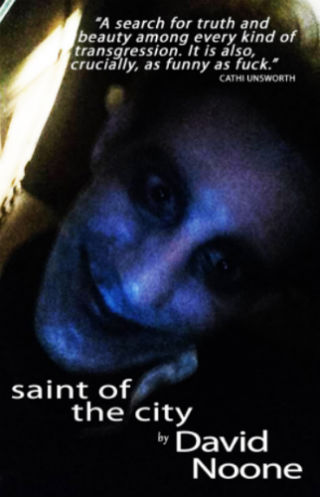 Following the suicide of his girlfriend Siobahn a decade earlier, the narrator Sean lives in a kind of limbo, drinking and fucking, shuffling from one therapy group to the next, unable to lay his ghosts aside. ‘I remember screaming,’ Sean relates, stripping away the many calcified layers of his personality to afford a brief glimpse of something altogether more fragile and vulnerable stirring beneath. ‘My eyes burning from the corrosive tears they were producing. Siobahn’s lifeless body lying on the couch and the whole room looking like it had been stained by the clotted blood that pumped from her wrists…In the ten years that had since passed I had been doing everything I could not to think about her while tending the weeds in my heart.’

In the aftermath of this tragedy, Sean makes ends meet pulling shifts in a bookshop, a sanctuary of sorts presided over by his favourite authors: Houellebecq, Kafka, Camus. Here he meets Elaine, a Goth with a taste for masochism. Raw intimacy soon follows. ‘Elaine was the only light left,’ Sean tells us. ‘The only thing that made life worth living. She was a saint. And this shithole needed one. Needed one badly. And Elaine was that saint.’

As his prolonged grief sours to guilt, however, Sean finds himself cast into the vacuum between reality and hallucination, compromising not only his chance of happiness with Elaine but increasingly bringing his sanity to a pitch of terminal collapse as ever-darker memories of Siobahn crowd in on him and acts of desperation assume a ghoulish logic of their own.

That Houellebecq’s name appears in the text not once but twice is surely no accident. Riddled with malaise, the acid-gargling tone of the narrator combined with the brisk narrative pace and overall atmosphere of soul-doom and claustrophobia are sure to find favour with fans of Whatever. Indeed, though never derivative, a sense of diseased fellowship pervades, as if Georges Bataille were reciting passages from Mark SaFranko’s Max Zajack novels while listening to early Nick Cave at full blast.

There are books which lay flowers beneath the reader to make the experience of reading as comfortable as possible; and then there are books like Saint of the City, which prefer instead to throw down a carpet of broken glass and leave their mark in the shape of a boot print across your face. For all its relative brevity, the tremors left behind are visceral and unsettling.

Christopher Brownsword was born in Sheffield, England, in the early 1980s. His book reviews have previously appeared in 3 A.M. and Word Riot. A collection of experimental poetry titled Icarus was Right! was published by Shearsman Books in 2010. It has been described as "excruciatingly unreadable."