The works of Jack Kerouac constitute a rich branch of the American literary tradition, which — through the craftiness of such important writers, like Kerouac himself — managed to escape the swamp of intellectual, expressional, pompousness. Ergo, the books of Jack Kerouac do not compose a shadowy and somehow pointless incident, merely supporting the matured American “underground” which wore away with a more dramatic intensity than the one through which it was constructed in late 1950s. Jack Kerouac was a unique experimentalist, a writer on the verge, and he continues to be one, among the very best.

After the termination of countless, equally essential and meaningless, frictions of modern and postmodern literature, the work of the Beat writers is nowadays widely considered as the most influential literary phenomenon of the twentieth century. The Beat movement overshadowed the Lost Generation and the versatile stream of American postmodernism. Whether this distinction is infused into one broader misconceived idea of literary backlash, or to what extent this same distinction is purely a postmodern one, is something that needs an extra period of intense investigation in order to be conclusive. However, the influence and the uniqueness of Jack Kerouac in Beat and postmodern literature is undoubtedly fundamental, integral.

Jack Kerouac overtook, with summary yet confident procedures, the myopic nature of the discordant aesthetic aspirations — the extensive imbroglio that American culture was burrowing through the ‘40s, the ‘50s and, mainly, the ‘60s. He provided the most expansive and transparent literary language since Walt Whitman.

To the consecutive editions of many previously unpublished works of Jack Kerouac which appear lately, which bring to light either important or lesser texts, is added the excellent La vie est d’hommage (Boreal 2016). This volume gathers original French writings of Jack Kerouac. Kerouac’s readers already knew of his fondness for peppering his novels with French sentences, the patois of his French-Canadian family in New England.

After the opening in 2006 of the Kerouac archive (part of the Henry W. and Albert A. Berg Collection of English and American Literature at the New York Public Library) we became aware that Kerouac had written and filed away many French texts. However, only recently has authorization been given to publish the whole of them in their original form. With the blessing of the Kerouac Estate, Jean-Christophe Cloutier, professor of literature at the University of Pennsylvania, has transcribed, reconstructed, and gathered these texts directly from the manuscripts. It took several years in order to present these French texts in their entirety. As Jean-Christophe Cloutier explains in his introduction, “Les Travaux de Jean-Louis Kérouac,” the French texts are greater in number and size than had been previously believed.

Kerouac toiled over and revised these texts, yet never showed them to anyone during his lifetime. They share an essential bond with Kerouac’s published works in English, shedding new light on his creative process by demonstrating the central role French played in his Kerouac’s poetics.

As a whole, this volume reveals to the readers a new adventure in the Duluoz Legend, as well as the extraordinary refinement Kerouac demonstrated when writing in his mother tongue. It is the language he used to give voice to the truth behind his status as the uprooted son of Québécois immigrants ensnared by the assimilative forces of the United States. At the same time, coming to English via French, jazz, and the greater polyphony of the continent gave him the secret freedom to undertake one of the most significant revolutions in postwar American letters. Jean-Christophe Cloutier, being acutely aware of the creative spirit and the significance of these texts, has provided us with a very valuable gift. 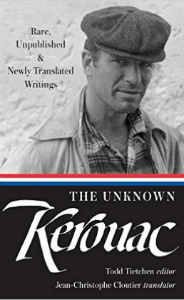 The volume contains sixteen texts. The first part consists of works of fiction, including two novellas and many short stories including “On the Road écrit en français” (On the Road written in French). The second part gathers short pieces of non-fiction including letters, notes, and commentaries. This volume will be published in the USA, under the care of the publications of the American Library, edited by Todd Tietchen and translated by Jean-Christophe Cloutier, under the title The Unknown Kerouac: Unpublished, Rare & Newly Translated Writings.

Jack Kerouac was, without doubt, one of the most melancholic and analytical viewers of his time and one of the most innovative. He was also one of the very few writers who purified the ardent wave of new literature from the consequences of the ideological and aesthetic moralism. Nowadays both reappear into world literature, trying to transform it to a coincidental and inorganic externalization.

Kerouac did not think nor write in a positive way, and above all was not — in contradiction to most of the writers of his time –so ignorant as to believe that reality is only a quite affordable ambit in which we gain access to leave the relics of our common pain. Furthermore, Kerouac did not write a single book in which he didn’t undermine the fullness and completion of the modern living conditions and thought.

After all, what is left for us to achieve through the ecstatic and unparalleled literary saga of Jack Kerouac is, “the unspeakable visions of the individual”.

Yannis Livadas is a Greek poet, essayist, translator and independent scholar with specialization on modernism, postmodernism and haiku. His poems and essays have been translated in nine languages. He lives in Paris, France. You can find him at http://livadaspoetry.blogspot.fr. Learn more about Yannis at Wikipedia.